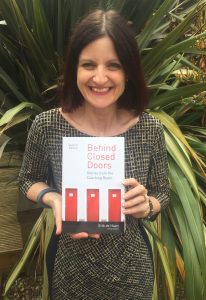 Photo – Alison Craig – proud co-author of a book about coaching

Thanks to Erik de Haan of Ashridge Hult Business School, and my fellow authors, for getting this very special coaching book to ‘launch’.  I was lucky enough to learn about coaching more than 20 years ago as a line manager at John Lewis and have been grateful for that ever since.

It is my aspiration to help as many people as possible learn about coaching, an invaluable life skill. Take a look at our Coaching Skills Workshop details if you are interested.

Thanks also to kind colleagues who congratulated me on my 3rd Alison Craig Coaching Ltd anniversary back in March – what a way to celebrate!

The power of coaching…

Thanks to the Southampton CIPD group for their warm welcome.  After an 80 minute, very fast, whistle-stop tour of Coaching Skills here is the feedback about the session…the power of coaching never ceases to amaze me, even when it’s fast and furious!

Question – “what will you take away from the event to implement for your future professional development?”:

Effective Coaching Skills, how to apply myself as well as others; active listening; 80/20% coachee to coach; the GROW model; take time to have development discussions; find someone to coach and get someone to coach me; using coaching skills more at work; new types of questions; made me aware I enjoy coaching; gave me an awareness of myself, body language, questions and use of silence; undertake my own personal development; set up my own action plans with

Posted in Blog | Comments Off on The power of coaching…

Special Offer – to get you off the starting blocks in 2015!

Not sure where to start in 2015?  Help yourself or a loved one get off the starting blocks through the gift of Coaching.  Limited Edition Gift Vouchers available with Alison Craig, for one off ‘Kick Start’ coaching sessions of 30, 60 or 90 minutes duration.

‘Kick Start’ Gift Vouchers start from £60 plus vat and are available for purchase until the end of February, 2015.  Note: Alison Craig Coaching Programmes usually consist of a block of 4, 6 or 8 sessions.  These gift vouchers offer a rare opportunity to experience top quality coaching without having to commit to a full programme.

Posted in Blog | Comments Off on Special Offer – to get you off the starting blocks in 2015! 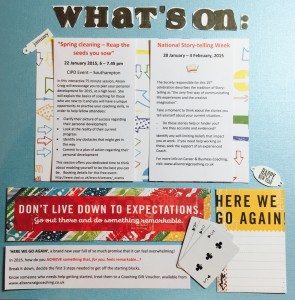 Sharing highlights from Alison Craig Coaching Ltd, opportunities for you & your network and perhaps a little inspiration!

Posted in Blog | Comments Off on “What’s on” in January…

for me when I launched my 1st Coaching Skills ‘open programme’ recently.  At the end of the session all 9 participants could describe what coaching is, its benefits and where it fits with the day job.   Even more importantly, they were able to ‘coach’ and left ready and raring to use this important skill with their teams and colleagues!

This Wordle chart captures how participants felt about the session.  ‘Empowering 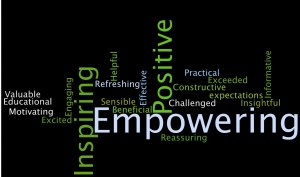 ’, ‘Positive’ and ‘Inspiring’ appeared repeatedly.  As a qualified and experienced coach, knowing the great benefits that managers can reap through coaching, it was incredibly rewarding to see this new group ‘get it’ and feel inspired to use their new found skills.

My ‘open programme’ makes learning coaching skills far more accessible, offering individuals and smaller organisations an affordable way to invest in their management development.  Having attendees from a variety of organisations brings an interesting dimension to the learning, as participants get to share best practice and network across other industries.

If you know anyone who is already a manager, or aspires to become one, please send them my way if they have yet to learn about the power of coaching!  Further dates available in the coming months…

Posted in Blog | Comments Off on Christmas came early…

The Power of the Unknown

Whilst awaiting my Masters results I became aware, once again, of the incredible power of the ‘Unknown’.  The Unknown can fill you with excitement or dread, or a range of emotions somewhere between the two!

In discussion with a client a few weeks later, I was reminded of the high level of anxiety that the Unknown can generate.  I remembered being coached myself, around something where I was fearful about the potential outcome.  This anxiety blocked my resourcefulness and creativity and I felt as if the whole matter was completely out of my control.

My coach encouraged me to consider the worst case scenario and my options or action if this were to happen.  This really worked for me – I was able to regain control and reduce my fear by working out what I would do if it became necessary.  I had reduced the power of the Unknown by defining what I was scared of and how I could handle this if it became a reality.  Although I would prefer not to have to deal with any of this, I at least knew what I would do if needs be.

It is easy, when under pressure in this fast paced ever-changing world we live in, to fall into a pattern of ‘catastrophising’ or ‘all or nothing’ thinking; having a strategy to combat these patterns reduces stress levels and releases back precious thinking time and energy!

Posted in Blog | Comments Off on The Power of the Unknown

A five hour drive to Wales for a relaxing Spa break proved to be a waste of time, diesel and excitement.  A power cut, ten minutes after arrival, foiled our plans and saw us heading home the following morning with a £400 repair bill in place of our relaxing holiday, after strong winds blew a heavy traffic cone into my car.

The situation could have been far worse and we were much better off than thousands of poor people whose homes were flooded.  So why did we remain disappointed and struggle to swiftly ‘snap out of it’?  I recalled facilitating numerous ‘Leading Change’ workshops, exploring with managers how human beings tend to react to change, particularly if the change is unexpected, enforced or perceived as negative.

Kubler-Ross’ Change Curve usefully explains the range of emotions we go through, before accepting loss or change and being able to move on.  Two people in seemingly the same situation may move through the Curve at a completely different pace, with some getting stuck at certain points or even sliding backwards, whilst others avoid the deep depths and race through to a new future. 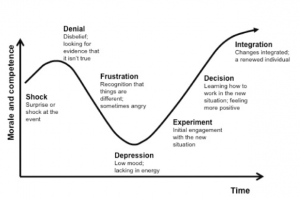 This unpredictability in people’s reactions is a challenging aspect of leading change – a manager’s communication and approach have to suit the whole team as well as each individual.  Understanding how people move through change is crucial to embedding it effectively in organisations.  William Bridge’s ‘Managing Transitions’ model provides further useful information for managers.

I like to picture Bridges’ model in relation to a trapeze.  The person facing change stands on the platform representing ‘The Ending’, not yet ready to grab hold of the bar and swing forwards into the unknown.  The middle territory is called ‘The Neutral Zone’, a place where the person may swing back and forth for some time, before feeling ready to step on to the far platform which represents ‘The New Beginning’.

Happily I’ve reached my own New Beginning, having booked my car for repair and let go of what could have been.  Time to start planning a new holiday perhaps…?

Posted in Blog | Comments Off on Leading Change

To blog or not to blog?!

I know it makes sense to have a blog but for two weeks I’ve been avoiding getting started.  After a great walk in today’s sparkling sunshine I feel ready to begin!

Pure white snowdrops, fast flowing streams brimming with rain water, fresh air smelling somehow cleaner than usual…all of these simple wonders inspired me to be natural, not to try too hard when writing…just to be me.

Being surrounded by rich green fields reminded me to tell you about my logo.  When choosing it, acorns stood out as clearly in my mind as the stark trees against today’s clear blue sky.  I wanted a symbol to represent my love of nature and one of the key reasons why I enjoy, and often feel humbled by, my role.

The old saying “Mighty oaks from little acorns grow” reflects the huge reward I still feel when a seemingly small realisation during coaching, or piece of learning during training, grows into a strong transformation in a person’s thinking or way of being.  Such change can revolutionise clients’ ability to perform, their levels of confidence, their relationships and so many other aspects of their business lives.  It is a real honour to be a part of that process.

Posted in Blog | Comments Off on To blog or not to blog?!